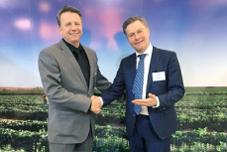 Agrícola Famosa has chosen the PerfoTec Carton Flowpack System for transporting melons and papayas by sea from Brazil to Europe. The system consists of the Ulma Flowpacker with the PerfoTec online laser system and the PerfoTec respiration meter. Extensive tests showed that the respiration rates of the same type of products could vary enormously throughout the season. In order to achieve maximum freshness, it was therefore necessary to have a grip on the permeability of the film and thus on the MAP.

Agrícola Famosa’s Managing Director, Richard Müller: “This unique technology delivers very positive results for us. We are pleased with this cooperation which, as far as we are concerned, will be further expanded in the coming years”.

Agrícola Famosa from Brazil is the largest producer of Melons in the world, and also produces papayas, bananas and asparagus.