“Packing stations are in the middle of the fields” 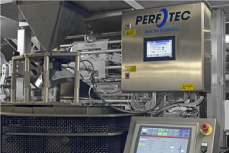 In England, packing stations are in the middle of the fields. Perforated packaging can extend fruit and vegetables’ shelf life. In the food chain, up to 50% of fresh products go to waste. To counteract this kind of food wastage, PerfoTec brought a special type of laser technology onto the market. This technology is used to package fruit and vegetables.
This Dutch industrial equipment supplier has since sold about 250 laser systems in 15 countries. These machines use lasers to make microscopically small holes in packaging film. The size and number of these perforations are precisely tailored to the product – fruit and vegetables, in particular – and extends its shelf life.

“The main issue is that the quality of oxygen declines rapidly. The CO2 level then increases. Our system measures the product’s so-called respiration rate. It adjusts the packages’ perforation to this”, explains PerfoTec’s Director, John Koekenbier.

This successful technology was born out of dissatisfaction in 2004. Back then, PerfoTec’s owner, Bas Groeneweg, was Director of the sprout processor, Greensprout. Brussels Sprout stalks turn brown fairly quickly. This discoloring is entirely harmless, but consumers do not like it. Groeneweg wanted to use perforated film to keep the sprouts greener for longer. But the film from back then was often not up to scratch.

“There were often no holes at all in the film or the holes were too big. Groeneweg came up with the idea to use lasers to make the perforations. Lasers are very accurate. He also attached a camera to control each hole individually. This was where PerfoTec was born”, says Koekenbier.

Marks & Spencer, a supermarket chain in the United Kingdom, was PerfoTec’s first big client. “In England, packaging stations are in the middle of their strawberry, raspberries, and blueberry fields. The products are refrigerated immediately. Our technology has the most impact under these circumstances. It extends these products shelf life by a minimum of three to four days”, continues Koekenbier. The technology is now also used for potatoes and vegetables such as broccoli and leeks. It is also used in the floricultural sector.

A new product added to the sector, is cut and mixed salads in bags. These bags are filled using a filling funnel. However, in a traditional packaging system, this is a slow process with a high rate of wastage. PerfoTec has developed a special filling funnel which has a oxygen controlling device.
“This system works faster and reduces product wastage. We brought in to market this year. We have already sold many. Most in the Netherlands, but also in England and Norway”, Koekenbier says.

PerfoTec now employs 25 people. FIve of these work in the United States and England. Three more branches are to be added at the end of 2018. Koekenbier goes on to say, “We are focusing on growing our company gradually. We are, however, ambitious. Our long-term plan up to 2022 states that we want to sell another 300 PerfoTec systems worldwide. This is more than double the current number. I am very confident about developments in South America and Asia. We are currently doing tests in North America. These are for a large supermarket chain. If all goes well, which I assume it will, a new market will also open up for us.”

Koekenbier knows there are still unexplored areas where the laser system can prove its worth. “Here, I think of, for instance, the meat processing industry. We haven’t gotten to that. There are, of course, other companies who are in the business of extending the shelf life of fresh products. This is possible with laser technology but also by other means. Perhaps we can discover new areas through partnerships. Reducing food wastage is, after all, a good goal to work toward together.”