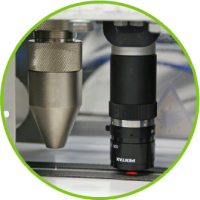 The Science – ‘Fresh produce needs oxygen to stay alive. By controlling the amount of oxygen, the respiration rate and aging process are reduced. This extends the shelf life and improves the quality of the produce!’

All fresh fruits and vegetables are living products and their life processes continue after harvest; the two most important being respiration and transpiration. The former being a complicated sequence of chemical reactions involving conversion of starches to sugars and the change of those sugars into energy. The normal respiration results in the fruit and vegetables consuming oxygen and giving off carbon dioxide, water and heat. The higher the ambient temperature surrounding the product, the greater will be the temperature of the product itself and consequently the higher its rate of respiration. The second process, transpiration, is the loss of water by evaporation which will occur once the fruit or vegetable is removed from its plant or root, which has been the source of water during its formative period. 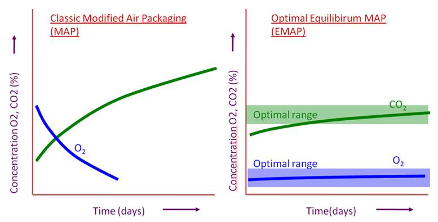 Fresh produce needs oxygen to stay alive. By controlling (reducing) the amount of oxygen, the respiration rate and thus the aging process are reduced. This extends the shelf life and improves the quality of the produce. Utmost care must be taken to keep the oxygen concentration in the package high enough to ensure that some aerobic respiration can occur. If there is no oxygen present, anaerobic respiration and rapid spoilage will occur.

EMAP (Equilibrium Modified Atmosphere Packaging) is a method for prolonging the shelf life of fresh produce (i.e. fruits and vegetables) by optimizing the in-package equilibrium atmosphere. This is achieved by optimally controlling the equilibrium concentrations of O2 and CO2. In general, a relatively low concentration of oxygen and a respectively high concentration of CO2 retard or prevent the oxidation process, which is responsible for the deterioration of the taste and flavor. EMAP exploits the natural respiration of fruits and vegetables for regulating the in-package atmosphere. The targeted Modified Atmosphere develops as an equilibrium steady state composition controlled by the modified permeability of the packaging film. The required transfer rate through the packaging film is obtained by a properly designed micro-perforation pattern.

Apart from the results, the difference between MAP and EMAP/AMAP is that MAP uses inert gases to create a static atmosphere whereas EMAP/AMAP merely adapts the permeability of the packaging through micro perforation in order to achieve an equilibrium atmosphere inside the package.

Film permeability is the critical control point for the quality and shelf life of fresh produce. One perforation more or less can make the difference between 1-3 days extra shelf life.

The only way to make accurate holes in packaging film is by using a high precision laser system. A complicating factor however is the normal variation in film thickness, which may lead to variation in hole sizes. It is therefore important for the laser to automatically adjust itself ‘on the fly’ to balance out any variation in film thickness. The PerfoTec laser is the only laser in the world that has this ability with its patented closed-loop-feedback-camera system.

For more information and advice about your specific product, please contact us.